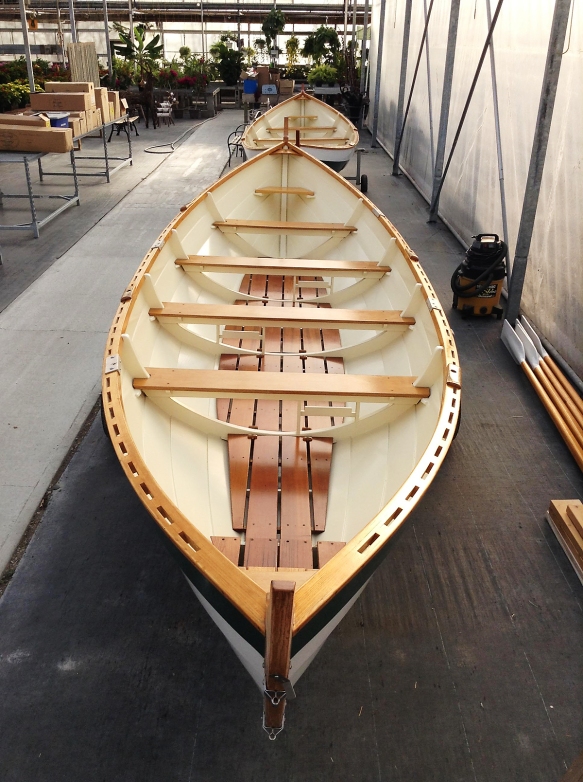 Sea Shadow and Sea Spirit, having been refinished inside, were turned over today with the help of a very enthusiastic crew. They’ll both receive a fresh coat of paint on the outside before going into storage. Hard to believe it will be almost six months before they’ll see water again. Unfortunately in this part of the world our rowing waters don’t stay liquid all year round. 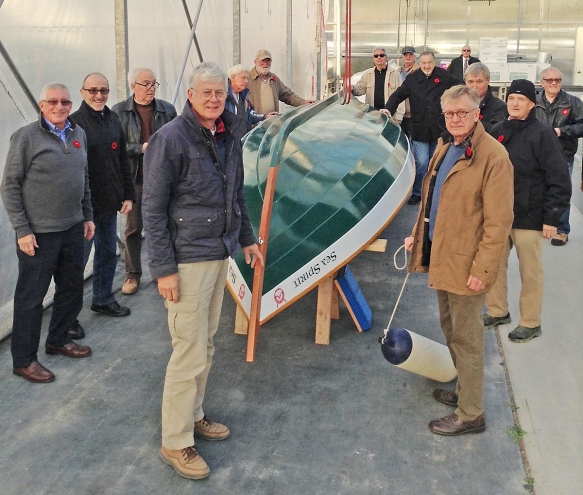 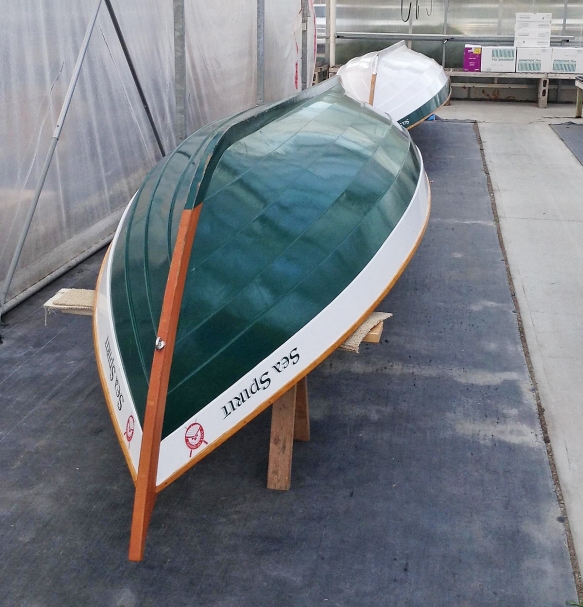 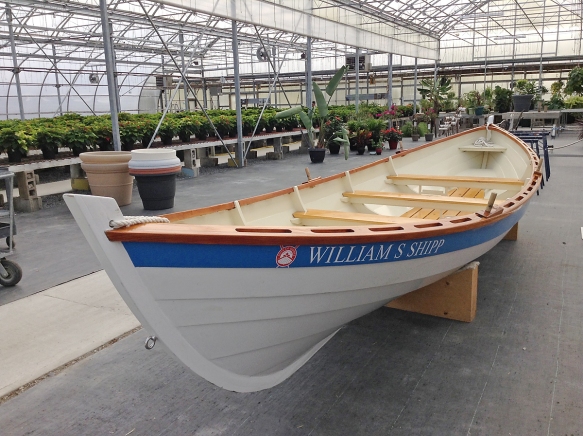 All three skiffs will get some end of season tender loving care. Instead of waiting until the spring to work on the boats we decided to do the routine maintenance this fall and take advantage of Lockyer’s greenhouses to do the work. The Shipp needed a second coat of paint on the interior and the brightwork touched up. She will be moved out on Friday and the Shadow and Spirit will take her place.

The first around the island row this season saw all three boats filled in less than 24 hours. Not sure if it was the row or the pub lunch that was responsible for the great turnout. We’ll have to schedule more of these rows before the season ends. 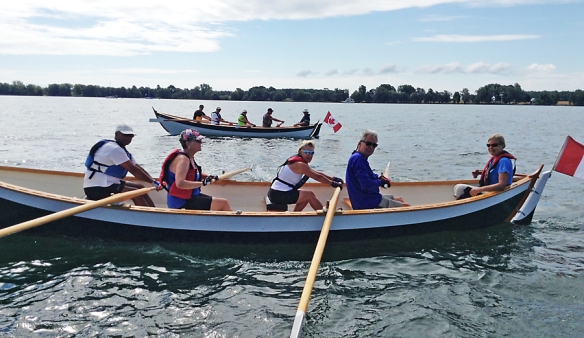 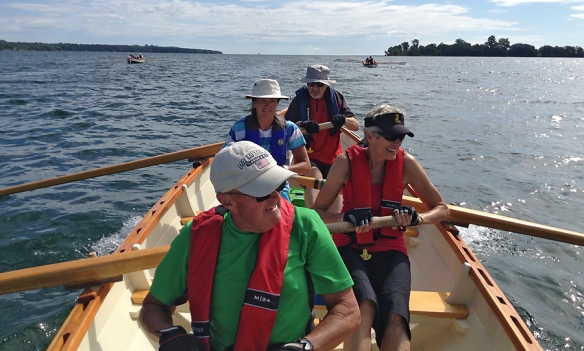 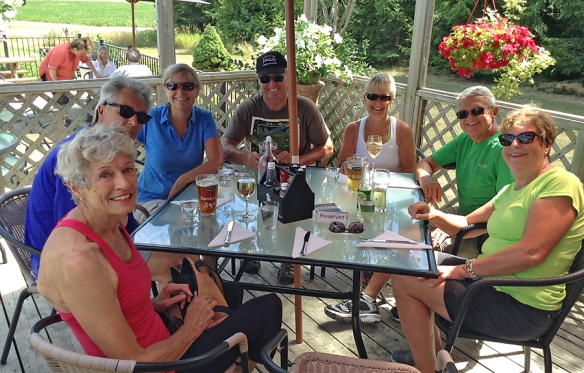 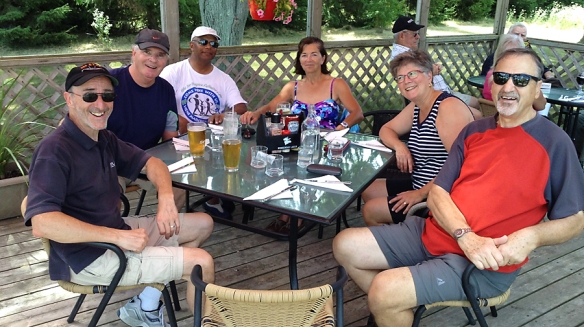 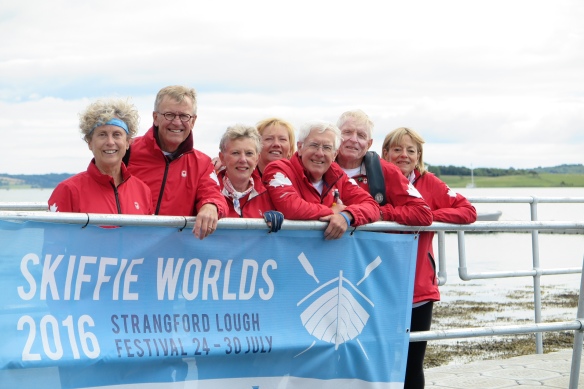 Last dispatch from the 2016 Skiffie World Championships in Northern Ireland.

The races are finished, the celebrations over and the last Guinness tipped in Killyleagh (for now). We made our Ayle Of Quinte Skiff Club and The County proud. There was an incredibly warm feeling toward the Canadian team and we were welcomed everywhere. Our team was completed by the skilled and enthusiastic Scots, Helen, Jean and Robbie. Ramharry, the boat we rowed, was generously loaned to us by the Donaghadee Coastal Rowing Club in Northern Ireland.

We have been very impressed with the significant community involvement and support for every European team that we encountered and look forward to developing the same level of engagement and support in The County.
Let’s row! 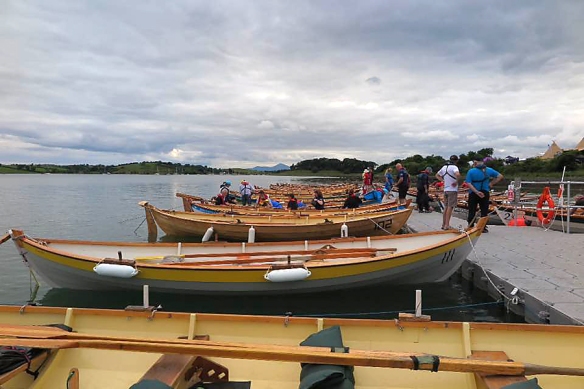 The Battle Of The Boats continued today with 2 races for us, both Men’s and Women’s 50+. Our times were very good but not quite good enough for a medal. We are still the oldest team, although not by much, and the object of much attention. The weather today is called “mizzle” although we would call it light rain, and fairly warm. We came home soaked. The sea has been quite calm all week and there was very little current today. We have a day off tomorrow and plan to head into Belfast. Stay tuned. 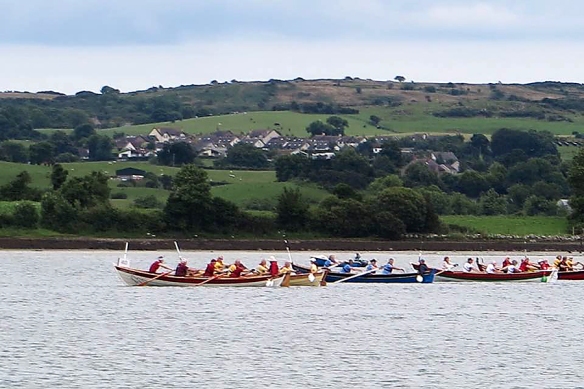 The Ayle Of Quinte mixed 60+ team made it to the finals in the World Skiff Championships under typical Irish skies. The team achieved a personal best time. No medals but thrilled with the achievement. Just to be part of the scene in this incredible venue was enough but to row our hearts out in the heats in the morning and qualify for the finals was brilliant.

Skiffs Worlds day 1 and the women had a very good race. We didn’t win but we had a fine time even with the current. I was interviewed on national TV so I figure I can pay for the trip if I charge for autographs! 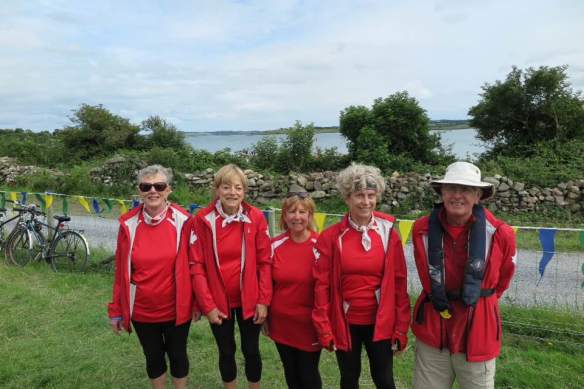 Rowing in #81, Ramharry, the men’s 60+ team did The County proud with a very good race under misty conditions. Robbie, our Scottish friend, was an excellent addition to the crew, the team rowed hard and placed well. There was some head wind and the usual current. The job of the cox is complicated as the lanes are only colour marked at each end, the mark is hard to see and there tends to be some lane drifting. Today there was a little oar clashing at our turn just to keep the excitement high.
There is lots of excitement, lots of press and smiles everywhere. 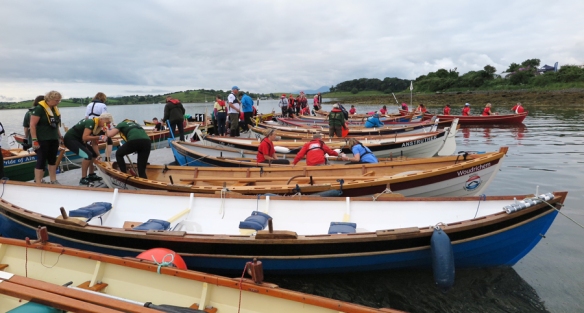 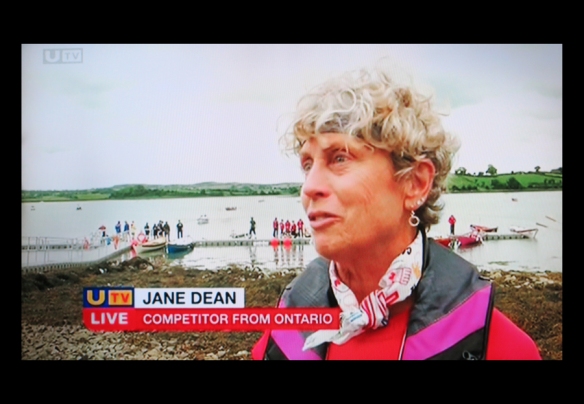 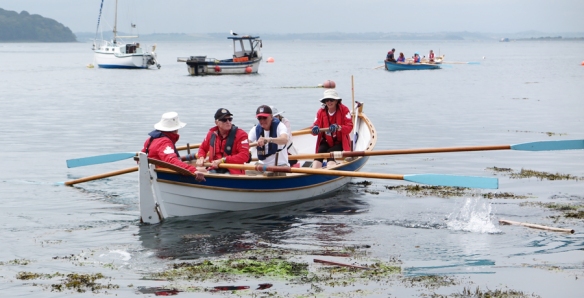 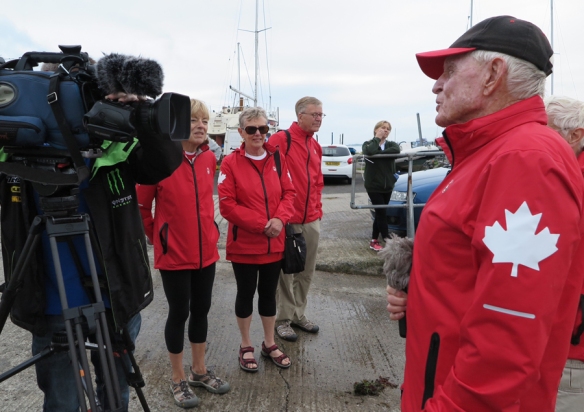 The 2016 Skiffie Worlds Championships got off to a great start with a spectacular Sunday afternoon flotilla. The colourful skiffs rode the strong tide through the Narrows accompanied by two tall ships, a salute of cannon fire and loud cheers. The Canadian team has been interviewed on radio and television, photographed and warmly welcomed. Races start in earnest tomorrow with the women leading the Canadian team. Stay tuned! 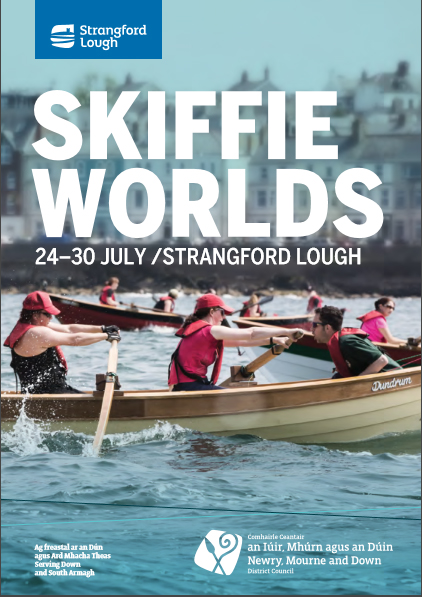 Ayle of Quinte Skiff Club is entered in the following races over the next six days at the Skiffie Worlds.They will be competing in the skiff Ramharry #77